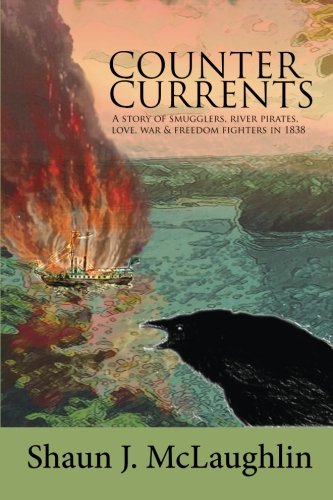 My self-published novel, Counter Currents, is a story of smugglers, river pirates, rebels, love, war, and freedom fighters. Most scenes are set against the grandeur of the Thousand Islands during the drama of the Patriot War in 1838. Among the raiders was Bill Johnston, the Thousand Islands legend. The protagonist, Ryan, a young immigrant, is drawn into Johnston’s world of piracy and secret societies. Ryan falls for Johnston’s daughter, Kate. Tugged by the opposing currents of romance and war, Ryan struggles to reconcile his family history, his duty and his heart.

My other book, The Patriot War Along the New York-Canada Border was published by South Carolina-based The History Press. In November 1838, 200 idealistic Americans attacked Upper Canada in a campaign to free its colonists from alleged British tyranny. Many died by musket, bayonet, and the noose. Others became slave laborers in Tasmania. That raid was one of 10 attacks on Canada during 1838 by Canadian rebels and American freedom fighters.

I was born in Canada and have lived here for 60 years, other than 2 years in California. My formal education is in journalism. I worked as a journalist and technical writer for 35 years. I have written short stories as a hobby since I was 14. I live on a 125-acre hobby farm with my artist wife (who designed my novel cover). I am a town councillor (elected in 2010) of the small, mostly rural, community of Mississippi Mills, Ontario, west of Ottawa.

My novel started as a short story in 2007. Three friends who read it urged me to make a book of it. The story included one of my favorite historical characters from our region, “Pirate” Bill Johnston. So, I said “why not,” and spent three years writing and rewriting it.

The history book fell into my lap. An editor at the History Press discovered the history blog that I had started about the Patriot War to build interest in my novel. She asked me to write a book about it. I said yes.

Counter Currents works on several levels. The story is set in the Thousand Islands of the St. Lawrence River, with its maze of islands and odd channels. Also the protagonist is tugged in different directions by love, loyalty, and war. The title sums up the conflicts.

There was no obstacle to getting the history book published. In a rare turn of events, a publisher asked me, an unknown author, to write the book. What could I say!

For Counter Currents, I queried dozens of agents and publishers in Canada and the US. Over half never responded. One small publisher in Iowa offered to publish it, but they closed down shortly after I signed the contract. I studied the self-publishing arena and the related technologies, and made a decision to be my own publisher. I offer the book in paperback and as an e-book.

I showed an interest in writing as early as 12. My father gave me an old typewriter in 1965 and I began writing stories. Most were junk but I kept at it. At my father’s suggestion, I went into journalism after high school because, as he said, I could make a living at writing that way.

When I am in a writing cycle-that is, not marketing books-I get up early, have breakfast and coffee, take a short walk with my wife and dog, and begin writing. My clarity of thought is best then. In the afternoon, I will research the book (if needed) and make notes about what to write the next morning. I find it easy to write.

When you write fiction that involves historical characters, like I do, most of the names are already there. For others, I get a mental picture of the character, match it to one or more people I know, and use that name or a slight derivative.

My first novel taught me that I love the process of creation. I also learned I will become a better writer. I self-rejected most of the first draft of the novel, rewrote it, and then tinkered with passages for a year. I kept seeing mistakes (and learned about common mistakes from books on writing); so, I had to keep fixing them.

Next time I will spend no time trying to find a publisher for my fiction.

I have a detailed outline for the sequel to my novel. It will be set partly in Australia, which I will visit in the fall of 2012 to scout locations. I plan to research a second book on the Patriot War to cover events in Michigan and Ohio.

Read books on how to write well unless you are already a best seller. Write regularly. Be confident but not cocky. Invite criticism, do not fear it.

The perfect reader is someone who loves history and enjoys being transported to an earlier era.

I started a publishing imprint with info on both books. The web address is www.raidersandrebelspress.com.