You are here: Home / Author Interviews / Scott Keen – Scar of the Downers 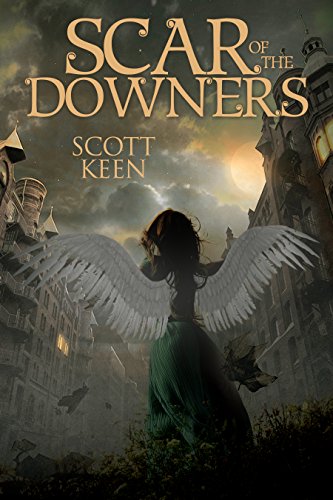 Scar of the Downersis a young adult fantasy about two slaves named Crik and Jak, who are thrust into a difficult spot. Do they stay in the dark city of Ungstah under Kilvar, their cruel owner, or do they try and escape, knowing if they fail it is guaranteed certain death? It is a story about finding hope when no hope exists. It’s about rising above the scars that one bears in life, about breaking free from the things that hold you down. Ultimately, it’s about freedom. How far would you go to seek it? How much pain would you endure to capture it?

I grew up in rural New York, went to college in Tennessee and graduate school in Virginia. I now have four daughters ranging in age from two to ten, the older of which I homeschool. I actually went to law school for a semester before deciding to pursue a Masters of Fine Arts in Script & Screenwriting. I’ve been writing on and off since high school, but it was mainly poetry or songs until I went to graduate school.

Eight or nine years ago, while I was still in graduate school, I started writing a short story. Perhaps it was just an idea of a story. A rich man had adopted an orphan from the street and was watching him play in the yard. There was something within the orphan that was pulling him back to the streets. It was as if the street had control over him.

That was the birth of this story. How do you break free from something that has control over your life? How far would you go to achieve that freedom? That idea is what inspired me. In fact, it still inspires me.

The title was originally called Child of the Downers. Child was the name of my main character. Through the editing, however, I changed the name of Child to Crik, who was actually an older character I used to have in the story. But as the story continued to develop, I realized the story was, in a way, bigger than Crik. It was about the scar that every Downer has branded on the arm. How do you escape something like that? Can you escape something like that? So, it almost seemed inevitable that the story would be called Scar of the Downers.

What obstacles did you encounter in getting this book published?

The obstacles were the same as everyone else. I received rejection after rejection, mostly from agents though. How do you get your foot in the door? How do you get noticed? These are obstacles that most people are going to have to deal with, and it was no different than me.

How did you overcome them?

I don’t think I did. I think I got used to them. You have to accept the obstacles (the rejections). But you must also move on – persevere! That is the closest thing to overcoming them.

To be honest, I didn’t really know I wanted to be a writer until I started doing it when I was in college. When I was in my late teens I was in a band and I started to write songs and poetry. That’s it. But as I got older, that didn’t seem like enough. I felt like I wanted to write more, to say more. Occasionally, I would write a short story – mostly about how I wished life would have turned out. Of course, I used a fictional character in fictional situations, but the motivation behind it was the same. I could write stories, meet characters, create heroes. Then I took a screenwriting class in college and I fell in love with creative writing. But my “professional” love for it didn’t start until I quit law school to attend the MFA program.

Not really. Being a stay-at-home-dad, who also homeschools, you don’t have the luxury to form a ritual (at least I don’t). Since my children are still little, I have to navigate the world of nap times, night wakings, helping with school work, potty accidents, etc.. I write when I have the time. It may be at 11:00 in the morning, or 10:30 at night. But since currently life is somewhat unpredictable, I do try to get out a couple of evenings a week and work at Starbucks or a restaurant. Then, I just put my headphones on, listen to some evocative music (usually orchestral movie soundtracks) and dive in to the story.

Finding the names of characters isn’t easy. Sometimes I had to do research to find the perfect name. Other times, however, it came right to me. Since the Downers characters essentially named themselves, or their owners named them, I decided their names would be a little more like a nickname – for example, Crik, Jak, Tinker, Slink. For the evil characters, I went for something that sounded mean or had its root in a negative word: Kilvar, Beor.

Did you learn anything from writing and publishing this book?  What?

The one thing I learned, or perhaps realized, is that I don’t know if I will be ever truly satisfied with anything that I write. I could edit a book a thousand times, and still find things I would like to change. And sometimes the changes were in earlier edits. And the changes aren’t always big changes.

For example, before I wrote this as a book, I was working on a treatment for it as a play. In the treatment, Kilvar (the Downers’ owner) owned a store in which they worked. When I wrote the first draft of the manuscript, I removed that aspect, though I am not sure why. Over the next 7-8 years it wasn’t a part of the story. It wasn’t until after I was signed with my publisher that I put it back into the story during one of my rounds of editing. And I’m glad I did. The question you must ask yourself is this: is the change good for the story or is it a change for change’s sake? Sometimes the answer isn’t always so clear. In the end, I have to accept the fact that the book was perfect in that moment.

I don’t know if I would do anything differently than what I could for what was in my control. Perhaps I wouldn’t have tried sending my manuscript off to agents so quickly in the beginning. I was naïve and ignorant of the business. But it was through those rejections that I learned the most. It forced me to research the publishing industry. I had to educate myself. Unfortunately, it was through a lot of pain and frustration.

I love all different kinds of fantasy. Mostly young adult. I loved the Harry Potter series. I love Tolkien’s works. What really inspired me was the novel, The Book of the Dun Cow, by Walter Wangerin Jr. I love books with true heroes. I’m not crazy about stories that have a lot of cynicism in them. I also love the classics, though. Dickens, Dostoevsky, Hugo – I think these authors had more freedom to explore their characters, their plots. And so those stories seem so much more expansive and thorough than some of the books published today.

I have two books that I’m currently working on. One is finished, and I’ve put it aside before I go back and start editing it. It is sort of a mystery set in a cozy village in the middle of a post-apocalyptic world.

The other book is the 2nd novel in the Downer series. The working title is called Rise of the Branded (or Rise of the Downers). Not sure which one yet. What I can say about this book is that you see more of the world outside of Ungstah in which the Downers used to live. There are more characters and creatures in this book that were referenced in the first.

Don’t give up! That’s the only thing I can say. Don’t give up. If you want to write, you are going to have to ignore a lot of the naysayers (the biggest one just may be yourself). You may have to ignore that voice as well. But the reason people are successful in life is because they didn’t give up. In my opinion, perseverance has always trumped talent. You always have to keep going, keep pressing on. As soon as you stop, you fail.

I would say the perfect reader is younger boys to late teenage boys. I wrote a book that I would’ve loved to read when I was ten or twelve, or even older. I recently heard from a ten-year old boy that read the book in two days. In some ways, that is a greater complement than any review I could receive. There aren’t enough books geared for boys, and so knowing it kept his attention that strongly – it made me happy.

I usually blog at least two times a week at www.scottkeenbooks.com. People can also follow me on twitter @scottkeenbooks or check me out on www.facebook.com/scarofthedowners or Goodreads.