You are here: Home / Author Interviews / Perry Thomas – From Slave to Governor 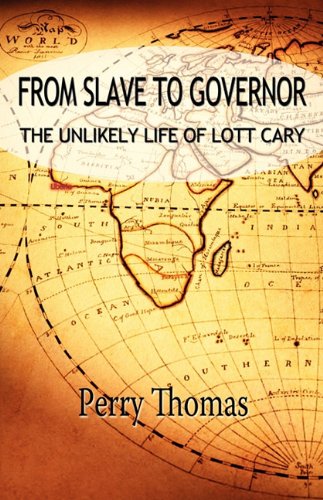 From Slave to Governor: the Unlikely Life of Lott Cary could be called my most recent book; it was published in 2010, in both paperback and e-book editions.

Good News from Indonesia: Heartwarming Stories from the Land of the Tsunami could also be called my most recent book; it was published as a hardback in 2008, but a paperback version came out in 2011, and the e-book edition is currently in process.

From Slave to Governor tells the true story of a real hero. Lott Cary was born in slavery during the American Revolution, purchased his own freedom in the early 1800s, became both a prosperous businessman and a respected preacher in his native Virginia, then left it all to cross the stormy Atlantic and join a new and struggling American settlement on the coast of West Africa. So effectively did he use his gifts there that he became not only the spiritual leader but also the fearless governor of Liberia who died fighting slave-traders. Although fuller and more accurate than any of the published biographies of Cary, this book is listed as a novel because reliable historical materials have been used to make up for lack of data from his early years.

Good News from Indonesia grows out of three decades in Indonesia. It isn’t a memoir about me or my family; rather, it tells about men and women, boys and girls whose paths crossed ours during those 30 years. As the subtitle states, it is a collection of heartwarming true stories from a troubled land half a world away.

I’ve been involved with writing, editing, and publishing since my early years. More than 60 of my books have been published, both in English and in the Indonesian language. At first glance these many titles may seem quite varied as to genre and intended readership, yet they could nearly all be considered popularized works. Whether based on personal experience (such as Good News from Indonesia) or on intensive research (such as From Slave to Governor), I’ve tried to popularize people and events from long ago and far away so that they will be accessible to everyday readers in the 21st century.

My first three decades were spent in America — getting an education, then working at a large publishing house. My next three decades were spent abroad; besides working at a small publishing house in Indonesia, I also trained writers in several countries of Asia and Africa. Now I’m back in America again, continuing to write for publication in both languages. A good many of my books, like these two most recent ones, have been published under various pen names.

As to personal details, I have been married to the same dear woman for more than half a century; we’ve been blessed with two sons and seven grandchildren.

What inspired you to write these books?

I first read the intriguing story of Lott Cary while still in graduate school. Many years ago I wrote two shortened accounts of his life that got into print, one of them in Sunday School take-home papers and the other in an anthology. After an on-site visit to Liberia in 1990, I discovered hitherto-unused primary sources in the Library of Congress, and then went on to finish the job.

As to Good News from Indonesia, I am often surprised at how little most Americans know about the fourth most populous country in the world. How many people realize, for instance, that there are millions of Christians in Indonesia, . . . and also more Muslims than in all of the Middle East put together? As I met some of these many Indonesian Christians, I felt an increasing urge to share their stories with American readers.

An old-fashioned term I like to use is “calling.” I feel I have been called as a writer. This calling I have followed in many ways, through many years, in many directions.

Like most writers, I’ve always been an avid reader. By third grade my writings were making it into school papers for classmates to read. I wrote articles and maintained a regular column for my university paper, started producing church curriculum materials at 18, saw my first feature article in print at 19, became a full-time editor at 27, and saw my first books in print during my early 30s.

Several projects are underway — some of them red-hot, some only simmering on the back burner. I’m hoping a new young-adult biography of King David will soon be accepted for publication. A juvenile novel from the 1940s, other coming-of-age books for young adults, a series of devotional meditations — all of these are keeping me busy.

What is the best advice you could give other writers?

Just do it! Don’t talk about it, get down to work and do it.

One of my graduate school professors was asked how he could write so many books while still fulfilling other responsibilities. His reply: “You just sit down at your desk and resist the first fifteen impulses to get up again.”

Who are the perfect readers for your most recent books?

How can readers learn more about you and your books?

E-book versions can be found at www.Amazon.com, www.Barnes&Noble.com, and so on.