You are here: Home / Writing / Notes on the Opening Page of The Casual Vacancy, a novel by J.K. Rowling 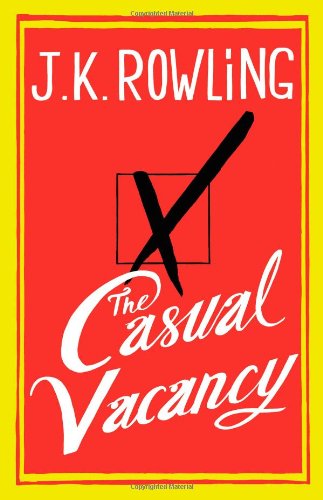 Which asks the question, what is special about this Sunday?

Barry Fairbrother did not want to go out to dinner.

Which asks the question, why? One would also assume Barry is an important character in setting up the plot of the novel.

He had endured a thumping headache for most of the weekend and was struggling to make a deadline for the local newspaper.

This answers the question, why doesn’t he want to go out to dinner? And also relates something about Barry’s background, that he writes for a newspaper, and raises another question, why is he struggling to make this deadline? And, what is important about this article? Question, answer, question, a process often used to set a story in motion.

However, his wife had been a little stiff and uncommunicative over lunch, and Barry
deduced that his anniversary card had not mitigated the crime of shutting himself
away in the study all morning.

Struggling writers often start with the same details, but not the question, answer, question process that draws in readers and draws them forward. It’s not about putting an actual question mark at the end of sentences, but naturally raising questions. When this process is done well, readers quickly learn to trust that if an author raises a question, it will be answered. In a badly written novel manuscript, one quickly despairs of getting anything other than an accumulation of descriptive details. It’s the ‘I’m watching this story as a mental movie and writing down the details’ style of writing that locks in new writers to a faulty style of storytelling.

It did not help that he has been writing about Krystal, whom Mary disliked, although she pretended otherwise.

“Mary, I want to take you out to dinner,” he had lied, to break the frost. “Nineteen years, kids!
Nineteen years, and your mother’s never looked lovelier.”

This dialog conveys a dramatic truth about this marriage, that both the husband and wife casually lie to each other. Readers in the beginning of a novel need these kind of truths about a story’s characters. Without that, one is simply being offered a collection of details, like someonr cataloging the details of strangers in a photo without providing some clue to why anyone should care.

Mary had softened and smiled, so Barry had telephoned the golf club, because it was nearby and they were sure of getting a table. He tried to give his wife pleasure in little ways, because he had come to realize, after nearly two decades together, how often he disappointed her in the big things. It was never intentional. They simply had very different notions of what ought to take up most space in life.

In one paragraph, Rowling creates a damning portrait of a failed marriage, which raises the question, why are these two people are still together? And, if the mutual lying can continue to keep the marriage on life support.

Very often when I read novels by struggling writers I have to go on, and on, and on about conveying a main character’s dramatic truth with their introduction. Often I find an utter lack of understanding of why this is important, or a weak attempt at it so the writer can continue on with their seeming passion, accumulating details that have no context, hence no dramatic purpose, eventually creating an impassable swamp of undifferentiated details.

This is why literary agents generally don’t have to read more than a first paragraph to know if they are reading a well-told story. Agents are generally being kind when they tell people they read the first five pages.

Barry and Mary’s four children were past the age of needing a babysitter. They were
watching television when he said good-bye to them for the last time, and only Declan,
the youngest, turned to look at him, and raised his hand in farewell.

There’s a powerful question here, why is he saying goodbye for the last time? What’s going to happen? This creates a compelling reason to keep reading.

Five paragraphs, the dramatic truths of these characters, and a powerful reason to keep reading. This is what successful novelists do on the first page of a novel.

Bill Johnson is the author of A Story is a Promise & The Spirit of Storytelling, available on Amazon Kindle for $2.99, Nook, and on Smashwords (includes listings for Apple and Sony).

Hugh Fritz - Made to Be Broken