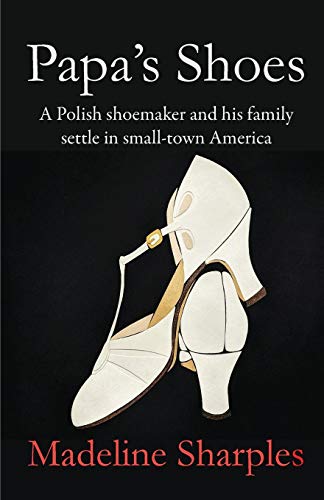 Papa’s Shoes, is a work of fiction about immigration with a feminist and historical bent. At 99,968 words, Papa’s Shoes is a stand-alone novel with series potential.

Ira Schuman is determined to move his family out of their Polish shtetl to the hope and opportunities he’s heard about in America. But along the way he faces the death of three of his four sons, a wife who does not have the same aspirations as his, and the birth of a daughter, Ava, conceived to make up for the loss of his boys. Ava grows up to be smart, beautiful, and very independent.

Besides having a feisty relationship with her overly-protective mother, Ava falls for the college man who directs her high school senior class play. With the news that she wants to marry a non-Jewish man, Ira realizes that his plan to assimilate in the new world has backfired. Should the young couple marry, he must decide whether to banish his daughter from his family or welcome them with open arms. Even though he won’t attend their wedding, he makes her a pair a wedding shoes. In his mind, the shoes are simply a gift, not a peace offering.

I grew up in the Chicago area and fell in love with writing in middle and high school. I attended the University of Wisconsin as a journalism major, but transferred to UCLA my senior year attaining a degree in English.

I worked in the aerospace business (TRW and Northrop Grumman) as a technical writer and editor, web content writer, and proposal manager for almost thirty years. I also worked for non-profits as a development director, managing capital campaigns, and writing grant proposals.

I finally fulfilled her dream to work as a creative writer and journalist late in life. After many classes and workshops, my memoir, Leaving the Hall Light On: A Mother’s Memoir of Living with Her Son’s Bipolar Disorder and Surviving His Suicide, was released in 2011 (Dream of Things).

My articles have appeared in the Huffington Post, Naturally Savvy, Aging Bodies, PsychAlive, Story Circle Network’s HerStories and One Woman’s Day blogs, and the Memoir Network blog. I have appeared on panels at writers’ conferences and have spoken about and read my work at book clubs, book stores, libraries, churches, writing groups, and on the radio. I also post about writing on my website Choices and host authors on my website who are marketing their books through the WOW! Women on Writing virtual book tours.

I am proud to add that my memoir Leaving the Hall Light On was on a list compiled by Erin Burba of BookRiot of the 100 Must-Read Biographies and Memoirs of Remarkable Women. This list included memoirs written by Mary Karr, Joan Didion, Cheryl Strayed, Sonia Sotomayor, Madeleine Albright, Maya Angelou, Anais Nin, Malala Yousafzai, Patti Smith, Katharine Graham, Nora Ephron, and many more.

While my husband was writing our family histories some twenty-five years ago he interviewed some of the elders in our family and collected other writings. I became very intrigued with what my aunt – my father’s sister – wrote when she was well into her eighties. That she wrote a whole page describing her friendship – as she called it – while in high school with a young gentile teacher. He regularly picked her up at her family home and take her to school plays and concerts and then out for a bite afterward. She also wrote that her brother (my father) objected so strongly that he got the family to move to Chicago to get her away from this gentile man. That remembered his name and could describe his looks and the way he dressed after 64 years made me think she must have still carried a torch for him. While in real life she met and married a Mr. Milk Toast, had two children, and lived the rest of her life in Chicago, I decided to let her have her true love in my story.

The lives of my grandparents, father, and aunt also inspired my story. However, my idea took the story in Papa’s Shoes far afield from how they actually lived their lives.

Are you a pantser or a plotter?

I am definitely a plotter as exemplified by how I wrote Papa’s Shoes. I started this novel at a UCLA Extension four-day workshop called, How to Write Your First Novel. I presented my idea to the class and got a good response, so I was off and running. The instructor asked us to write a first scene, then a last scene, and then a couple of middle scenes. Then we wrote character descriptions and fleshed out a scene outline. Though the scene list and the character descriptions changed somewhat during the writing process, my story idea stayed the same throughout.

I write every day of the week; However, I work on particular writing projects only during the work week. I always start my day working out, then breakfast, then a shower and getting dressed. Then I go to my home office and stay there for three to four hours. Right now, I’m working on a new memoir. I also write at least one poem a week, one blog post a week, a small two to three-line piece that I post on a Facebook page devoted to “small stones” every day, and a journal entry every day. My goal for my memoir writing is one thousand words a day. My journal entries are usually five hundred words.

My book went through ten revisions plus another final edit before I declared victory and sent the final-final-final version to my publisher. It received comments from three sets of Beta readers who generously read my drafts and gave me comments after early, midpoint, and near-final drafts. I took another more advanced novel writing course at UCLA online, and a revision course – also at UCLA. I also hired a content editor after revision seven and a copy/line editor after revision nine.

What software do you use to write?

I use Microsoft Word

Unfortunately I do. I find reviews very intimidating.

Write regularly as if it’s your day job and keep your ass in the chair.

Also be patient about publishing. It took me sixty-eight query letters over two years to find a publisher for my memoir, so I started my novel during that period. It takes perseverance.

I belong to two writing groups. One is to share information and our writing projects. In the other one we actually write a piece to a given prompt and then share our work with the group. We give each other very easy and loving comments. We also encourage each other to attend local writing events and/or open mikes.

Since my book also has a feminist and romantic bent, I think a good audience would be romance novel readers. It also has a universal topic – immigration. So people interested in immigration history might be perfect. Another group could be YA. I think it straddles the line between adult and YA fiction.

Please check out these links: