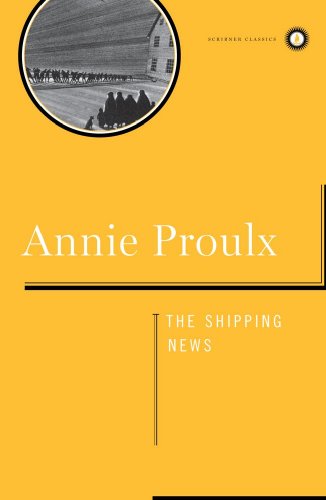 Annie Proulx’s The Shipping News is a great example of lyrical writing. While her writing might seem to violate conventional writing, her style always aims at getting to a deeper truth.

In The Shipping News, the lyrical writing in the opening has the purpose of conveying the deeper truth of Quoyle. It is entirely organic, yet also part of a clearly defined structure.

Hitching that lyrical writing to a purposeful structure is part of what makes Proulx’s writing so dynamic and potent and insightful.

HERE is an account of a few years in the life of Quoyle, born in Brooklyn and raised in a shuffle of dreary upstate towns.

This sentence offers commentary about Quoyle and the quality of his life growing up. The language conveys much more than several pages of small towns. The sentences gets to the heart of a truth about Quoyle.

Hive-spangled, gut roaring with gas and cramp, he survived childhood; at the state university, hand clapped over his chin, he camouflaged torment with smiles and silence.

Another sentence and two more truths about Quoyle and his childhood and college years.

Struggling writers usually invert this process, trying to get bland, pedestrian details to convey something important.

Stumbled through his twenties and into his thirties learning to separate his feelings from his life, counting on nothing.

This describes a character who’s life is contracting, becoming less important to him by the year.

Fat and lard, two of the most popular medications in America. As his life contracts, Quoyle expands.

His jobs: distributor of vending machine candy, all-night clerk in a convenience store, a third-rate newspaperman.

A life of no ambition and no feeling, until he becomes a third-rate newspaperman. That sounds dramatically interesting.

At thirty-six, bereft, brimming with grief and thwarted love, Quoyle steered away to Newfoundland, the rock that had generated his ancestors, a place he had never been nor thought to go.

Grief and thwarted love apparently send Quoyle off to the place of his ancestors to stew in his more recent failures. I’m assuming Proulx will get to what set off this grief and thwarted love. We’ve quickly moved through an over of Quoyle’s life to its beginning in this novel.

A watery place. And Quoyle feared water, could not swim. Again and again his father had broken his clenched grip and thrown him into pools, brooks, lakes, and surf. Quoyle knew the flavor of brack and waterweed.

Sending Quoyle to Newfoundland and water creates a vehicle to offer a reason why he fears water. This is organic writing.

From the youngest son’s failure to dog-paddle the father saw other failures multiply like an explosion of virulent cells–failure to speak clearly; failure to sit up straight; failure to get up in the morning; failing in attitude; failure in ambition and ability; indeed, in everything. His own failure.

This language conveys why Quoyle separated his mind from his feelings and why he withdrew into himself. The world via his father started pounding him inward at a young age.

Quoyle shambled, a head taller than any child round him, was soft. He knew it. “Ah, you lout,” said the father. But no pygmy himself. And brother Dick, the father’s favorite, pretended to throw up when Quoyle came into a room, hissed “Lardass, Snotface, Ugly Pig, Warthog, Stupid, Stinkbomb, Fart-tub, Greasebag,” pummeled and kicked until Quoyle curled, hands over his head, sniveling, on the linoleum. All stemmed from Quoyle’s chief failure, a failure of normal appearance.

In a short time, Proulx communicates the truth of Quoyle’s life.

A great damp loaf of a body. At six he weighed eighty pounds. At Sixteen he was buried under a casement of flesh. Head shaped like a Crenshaw, no neck, reddish hair ruched back. Features as Kissed fingertips. Eyes the color of plastic. The monstrous chin, a Freakish shelf jutting from the lower face.

Then, after Quoyle drops out of college…

Nothing was clear to lonesome Quoyle. His thoughts churned like the amorphous thing that ancient sailors, drifting into arctic half-light, call the Sea Lung; a heaving sludge of ice under
fog where air burred into water, where liquid was solid, where solids dissolved, where the sky froze and light and dark muddled.

Here Proulx moves from an outer description of Quoyle, to language that conveys the truth of his inner life.

Quoyle is a man who has been damned since birth, who, during the course of this novel, travels to the edge of the world to find a place he might belong. This will not be an easy journey, but it will be one deeply felt by the novel’s readers.

This kind of lyrical language works when it takes a story’s reader deep into the heart of a story and it’s characters, and Proulx does that.

Bill Johnson is the author of A Story is a Promise & The Spirit of Storytelling, available on Amazon Kindle for $2.99 and on Smashwords. He teaches workshops on writing around the US. He is currently the office manager for Willamette Writers, a group in the Pacific Northwest with 1,700 members.

Creating a Villain Your Readers Will Love to ...

Differences Between Writing Fiction and Non-F...

Bringing the Dead to Life, Notes on Twilight