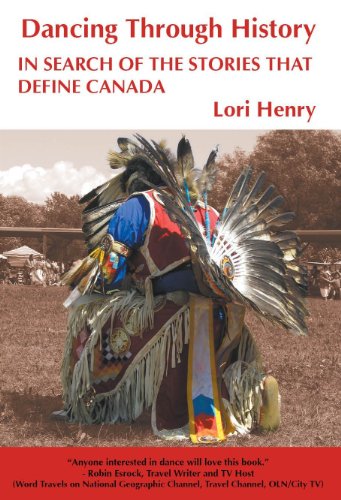 Tell us about your most recent book.

While some people take their vacations to sample a different cuisine or to try a new outdoor adventure, I travel to learn about a culture through its traditional dances. In my own country, Canada, there are countless cultures that have made themselves at home here and were able to keep their customs alive. I travelled all over the country to learn some of the dances that are still thriving (and some that are dying out) in my book, Dancing Through History: In Search of the Stories that Define Canada.

Are you a dancer yourself?

I took my first dance class when I was two years old and started performing only a few lessons later. As I was always the smallest, I had to lead the group out onto the stage and stay at the front, requiring me to always know what I was doing. I learned dances from the islands of Polynesia – Hawaiian, Maori, Tahitian, Samoan and Tongan – and performed many dances in each show. By seven years old, I was also taking tap and jazz classes from another studio, which led me to study ballet, contemporary, hip hop and modern styles. These days, I will try any form of dancing!

How does a dancer become a writer?

A bit randomly. After high school, I trained as an actor in theatre school and got into the film industry here in Vancouver. While I was working in restaurants and going to auditions, I started picking up odd jobs that allowed me to have flexible hours, one of them being writing. “Writing school” was on-the-job freelancing for various publications on diverse topics and was just a way to help make ends meet. A few years later and I found myself writing more and acting less, and a new career was born.

Was travelling always part of the plan?

I have always loved to travel and would save up my tips from working in restaurants to travel whenever I could. After I returned from a month-long trip to the South of France in 2003, I realized that I could pitch story ideas from that trip to the travel sections of several publications. My first pitch was accepted. From there, it took a few years but I eventually became a full time travel writer and now hop in a plane many times a year to research story ideas outside of Vancouver.

When the economy was in trouble in 2008, I had a conversation with a colleague of mine at a writer’s event. He was surprised to hear that I had such extensive experience as a dancer and wondered why I wasn’t using that knowledge in my travel articles. I thought, “Who would be interested in dance?” As it turns out, many adults took at least some dance classes when they were children or were caught up in shows like So You Think You Can Dance and Dancing With The Stars. I decided to put together all of the things I knew best, and was most passionate about – dancing, travelling and writing – into one project.

Given my background as an actor, I initially pitched the idea of travelling around the world to explore cultural dances as a TV show, but there just wasn’t any money for an unknown host to get the green light on a program that would be so expensive to produce. So I started working on the book version and, because I had built relationships with so many industry contacts in Canada as a travel writer, they assisted me with travel costs while I was on assignment for other publications. This allowed me to work on the book in sections while I kept up my freelance work. Four years later and it’s finally ready to be read.

Do you write while on the road?

Yes and no. Spending a lot of time in airports and on planes, I tend to go through my notes and photos at the airport, fleshing out things that are alluded to in note form and using my photos to add as much “meat” as I can to them. After I board the plane, though, it’s all relaxation. I put the notebook and laptop away and watch film after film, usually a combination of foreign documentaries, films I have on my to-watch list, and silly romantic comedies.

I am slowly starting my next book, at this point mostly transcribing interviews. As I mentioned before, I grew up Polynesian dancing and my next book with focus on Maori dancing in New Zealand. I was down under at the end of last year to do research there and I continue to take Maori dance classes when I am home. I am so excited to share what I have learned about kapa haka (Maori performing arts) since I was two years old. I promised it will be a fascinating read.

Find the unusual. There are so many writers competing for a shrinking piece of the pie, so being able to stand out is essential. Write about the quirky rather than the common; the surprising rather than the standard. Although editors often like to play it safe, if you can cover something distinctive and get them to take a chance on it, that is what will get you noticed.

Who is the perfect reader for your book?
Those who dance for a living, those who are training to become dancers, those who take one class a week at their neighbourhood studio, those who will only dance when they are alone, and, especially, those who have “two left feet” and continue to dance anyways.

Where can readers learn more about you and your book?
On my website
On GoodReads
Barnes&Noble
Buy the book at Amazon.com