You are here: Home / Author Interviews / Karen Mann – The Woman of La Mancha 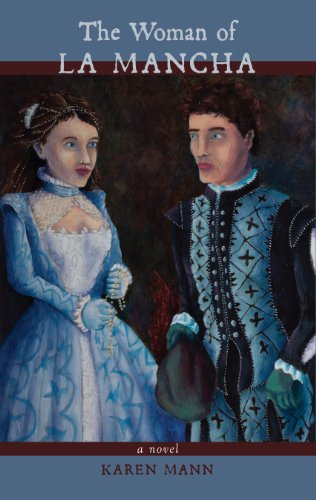 First, let me say thank you for printing this interview. After 27 years of writing, two of my books, The Woman of La Mancha and The Saved Man, were published in the same week. The book I want to talk about today is The Woman of La Mancha, a companion book to Don Quixote. In Don Quixote, the old knight names his idealized love Dulcinea. This character was based on a farm girl who Don Quixote had never met. Set in the time of knights and the end of chivalry, The Woman of La Mancha explores the journey of this young woman and a young knight who are separated and embark on their own quests to find their way back to each other.

I grew up on a farm outside of Indianapolis. My dad built a lake about 60 feet from our back door, so I grew up swimming, fishing, and ice skating. But my love was reading, which, I think, made me want to become a writer. I have written 6 novels (only the 2 published) and have 3 others in progress. I am the co-founder and Administrative Director of the low-residency MFA in Writing Program at Spalding University (http://spalding.edu/mfa). I now live in California to be near my two grandsons, who bring me as much joy as writing ever has.

While the novel is a companion book to Don Quixote, that book, on screen and stage, has been titled The Man of La Mancha. Since I am telling the woman’s story of Don Quixote, my title is a twist on the title that many people are familiar with.

As a child, I was an avid reader. At some point I thought I could do what those authors were doing; I could tell a story too. I wrote some things in high school but didn’t get good responses. I didn’t understand how to get better. I don’t think I even realized there were classes one could take; it seemed like it should be something I was born knowing how to do. Finally when I was nearly 40, I decided I had to find a class to teach me how to write. I knew I had to pursue this desire I had had for so long.

Sometimes the names for characters just come to me, an inspiration, I guess you would say. But I also do research to find names. For example, for The Woman of La Mancha I needed Spanish names from 400 years ago, and for The Saved Man I needed first century Roman names. I also think about my readers when I name my characters. It can be difficult for readers to keep track of characters if more than one or two characters have names that begin with the same letter. Or really complicated names are hard for readers to keep straight or even remember. That doesn’t endear a reader to your book! Generally, I would not use names of the people to which I am closest. I’m not writing about them, so I don’t want anyone to think I am.

Did you learn anything from writing this book?  What?

I wrote 1,500 manuscript pages for The Woman of La Mancha and ended with about 440 pages. Writing those extra pages were really important for me to learn more about writing, to learn about my characters and the setting, and to figure out the arc of the story. However, for my other book, The Saved Man: First Century, I didn’t want to write 1,000 pages that I was going to cut. Instead, I wrote a list of questions, which I answered in the voice of each of my main characters. In the questions, I covered their background, parents, childhood anecdotes, their beliefs, favorite and not so favorite things. The two questions I ended with were, “What is your secret that no one else knows?” and “What do we, the readers, know about you that you don’t know?” Learning their backstory, their secret, and the secret they kept from even themselves, helped when writing the book and saved me from writing a lot of expendable pages!

Writing is hard. It can be drudgery, and trying to get published is discouraging, defeating, and dismal. However, it can also be the most exhilarating thing you can do. Being immersed in writing, when the words are singing along, is the best high there is. I often think of a line in the poem “High Flight” by John Magee, “Put out my hand and touched the face of God.” And that’s the reward for all those “D” words!

My readers are men and women, some who have read Don Quixote and some who haven’t. Also readers who like historical fiction with strong women protagonists would like this book. Or if this quote from K. L. Cook (author of Love Songs for the Quarantined and The Girl from Charnelle) sounds like something you’d like, “The Woman of La Mancha is a funny, lusty, provocative, and epic picaresque that examines identity, secret selves, and the ways in which our lives, often unwittingly, intertwine with history and shape the destinies of others,” then you probably will. Thank you, again, for the interview. I’ve enjoyed it very much!