You are here: Home / Author Interviews / Hugh Fritz – Made to Be Broken 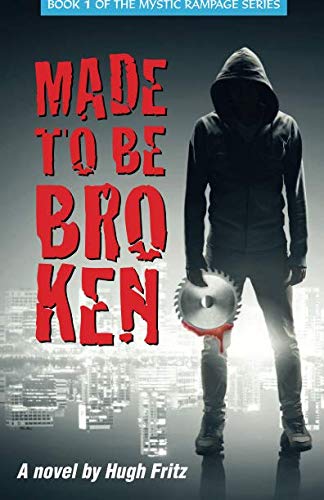 My most recent book is Made to Be Broken. It is the first in a trilogy called the Mystic Rampage series, and follows three individuals who are my version of genies. They don’t live in bottles or say “your wish is my command” but they have the ability to manipulate forces with their minds which enables them to do pretty much anything. When the three of them work together they are unstoppable but each has a different opinion of the best way to use their abilities which causes them to turn against one another.

I am from Chicago and have a background in chemistry from my undergrad years at Northern Illinois University. Throughout the book I try to incorporate concepts of biochemistry and physics into the way my characters use magic. There are times when I feel like Mystic Rampage is becoming a science fiction series, but in the end I prefer thinking of it as a fantasy.

I started writing this in high school. The Crucible was among the required reading, and it sounds strange to say this now, but that was the inspiration for my book. This project started as an alternate history about a secret war between witches and genies. It went through a lot of changes because I was worried that if I ever tried to publish it the readers would be troubled by the lack of historical accuracy. It was also similar to the Crucible so another concern was fans of classic literature feeling I had disgraced a treasured piece. This might have been an overreaction on my part, but I’m satisfied with the final product even if it is completely different than the original.

Now that you mention it, I didn’t. I was happy when it was finished, and being published was a major milestone, but somehow celebrating either of those events never crossed my mind. I guess in some ways I’m a boring person.

I was probably fifteen years old when I joined a club similar to the critique group I’m in now. I didn’t spend a lot of time on novels or short stories while I was there. I started by bringing in songs and later put together a series of skits using the other members as characters. I’m not sure if anyone took the club seriously (except for the organizer, James Klise, who was working on a story called Love, Drugged and got it published), but it was a good way to pass the time and everyone there seemed to be having fun.

I am definitely a plotter. I tried diving into part thee of the Mystic Rampage series without an outline and it was a disaster. Finishing it is going to be even more work now because there are entire chapters that I’m not satisfied with at all.

I write every weekend, whether I’m in the mood or not. I usually get through one thousand words in each sitting. My typical goal is completing a rough draft of a book in the span of a year.

I know I wrote at least four complete versions because that’s how many I have on a flash drive. I don’t remember how many others were trashed before I was even half-way finished, but I remember the reasons I threw them away. I spent too much time on character’s senses and writing every object in a room when setting up a scene. There was an early draft where I spent an entire page describing how a genie felt when he was making an object levitate. I realized it was getting boring so I cut it out along with scenes like it, and then realized I was deleting so much it would probably be easier to just get rid of the whole thing and start over.

I use Microsoft Word mostly because it’s what I’m accustomed to. When outlining I go to a notebook first because I can’t rearrange or edit as I go, which pushes me to keep moving forward. My mind wanders easily so when I’m starting a project the best thing I can do is get every thought on paper. When my wrist is cramped and I have several pages of notes that do not follow any logical direction I rest for a night before using a program like Scrivener to record what I feel could pass for good ideas and try to put some order to them.

I would seek feedback at an earlier stage. I was embarrassed to tell people about this project because I wasn’t sure I was ever going to finish or if it was any good. The first person I told was my brother, Chris, and it was after he told me he was writing a crime drama called Monsters. We started emailing each other chapters and he became my first beta reader. That was when I started actively seeking help with my writing, and eventually led to joining a critique group. Even though I was making progress, it wasn’t until I opened up about this project and started asking for advice that it really took off.

Yes. I realize how limited I am on my own so I believe the only way to improve is to pay attention to what others like and hate about what I do.

I’ve only had experience with one publisher so I can’t give comparisons about what one company did that worked better than another. However, one thing I learned is to take every opportunity to review the manuscript. I sent multiple versions to the book to my publisher, each with revisions. After a few back-and-forth’s, I was sent a PDF that should have been the final draft and the publisher just wanted me to look through it and give them the OK to print. It was tempting to respond immediately and give them the green light but I took the time to open the file. It was full of punctuation errors, extra letters slipped into words, and extra words slipped into sentences. I don’t know how it happened, but I’m glad I took one last look instead of letting the excitement get to me and allowing that version to be printed.

I should clarify this is not a negative review of my publisher. The people were very helpful and easy to contact for help. My point is to be thorough and whatever you do, don’t get lazy. Publishing is a complicated process that requires multiple checks for quality along the way.

I have more than a few friends that are authors and some that will be published soon. Soul Crossing is a graphic novel by Mia that is going to be released this October and another urban fantasy author named Marie Parks has been speaking with a publisher. I’ve learned that even if what they’re working on is not my area of expertise, I still usually have some advice to offer. It takes time for me to come up with meaningful feedback so I prefer to have a few days to read through their work and have a list of points to bring up.

At the start of this project I would have said it’s for young adults. Now I feel it’s for fully grown adults who want to connect with their inner child.

I have an author page on Amazon with information about the book and some blog posts.

I need to admit that I’m not very active on social media. I’m careful about what I put online and always let my cursor hover over the post button before (and if) I click it. I’m working on being more comfortable and have a Facebook page called Stories by Hugh Fritz.

How do you research ideas for your story?

I like it when this question comes up because it can go a number of different and sometimes interesting directions. Personally, I like to use writing projects as learning opportunities and find them to be a great excuse to research real world concepts that can be incorporated into the fiction, whether they’re historical, scientific, or anything else. I spent a long time going through books by Leon Lederman, the experimental physicist. That material plays a very small role in the series, but I don’t regret the time I spent trying to understand it and work it in. Starting the second book also served as a way to exercise because there is a lot of fighting in it so I decided to start taking kickboxing and aikido classes in the hopes that having hands-on experience would help me make those scenes more realistic. I know some authors who spend a lot of time on Google and like to joke about how strange our browsing history can be, and I remember an afterward in a horror novel where the author mentioned he spent a few days walking touring cemeteries, searching for the perfect one to use in his book. Let’s face it, fiction authors do strange things for the sake of their work, but in the end it’s worth it.

Reducing Everyday Distractions So You Can Get...