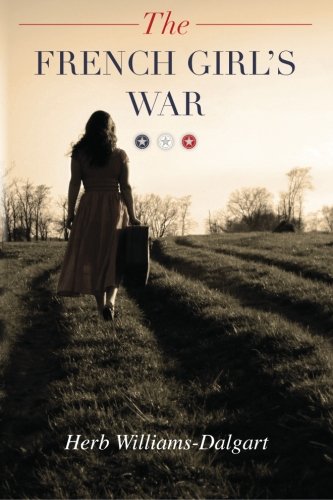 My most recent book is entitled, The French Girl’s War>. It takes place beginning in 1939; just when Germany has invaded Poland and France enters the war. Sophie Claveaux, my protagonist is an eighteen-year-old Jewish farm girl, who believes she carries a curse that threatens her loved ones. Her mother died giving birth to her and her father has long suffered the loss. Blaming herself, she decides to change her fate and study art in Paris. But before she can enact her plan, her father joins the war, renewing her fear that her curse will always prevail. Forced to abandon her dreams of Paris, Sophie is sent to live in safety with her grandmother—only to learn there are no safe places in a time of war.

To survive, Sophie must face very real enemies and conquer her own insidious fears. Many around her doubt anything good can ever happen again, forcing her to decide if she will join the mourners or seek the hope that eludes her. Sophie must fight to protect her grandmother, her new home, and a curious blind artist who could change everything

It’s a story of family relationships, personal courage, and new love, which I hope will connect the reader to the larger story of World War II through the tale of one remarkable young woman.

Tell us something about yourself. What inspired you to write this book?

While I work full-time for a market research company, I’ve always been a writer. I got my degree in English and Creative Writing, as well as a certificate in screenwriting and have written four award-winning screenplays. My debut novel, The French Girl’s War was a quarter-finalist in Amazon’s Breakthrough Novel Award last year and I published it this year. I also am named for my grandfather who died during World War II and I guess I’ve always been fascinated by that period, trying to piece together my own story since I never met my grandfather and my mother has no memory of him. I also adore travel, particularly to France. Combining my interest in WWII and in European travel, the story sort of grew from there.

With my female protagonist, Sophie, struggling with her own issues and coming of age during a time of war, it seemed fitting to call it her war in my title. I think we all fight a bit of our own war with life and its struggles, but when you grow up during wartime, the war is personal. So, I thought the title, The French Girl’s War captured both the time in which Sophie lives and the personal struggles she faces.

I’d have to say as a working professional with a family, bills, and a mortgage, I’m like a lot of folks. To spend the time needed to write, proof, edit, publish, and market a book while managing a fairly busy life—that was the real challenge. Carving out the time. I had to beg off on quite a few obligations and I have my wife to thank for shouldering the burden to give me the time.

I have always loved reading, and so writing was sort of the flip side of that. I love the creative impulse and writing is just how it manifested itself most strongly in me. I love losing myself in a good story, in a compelling character, in a world I want to learn more about. Reading and writing both do that for me. The first real thing I wrote commercially was a spec script for the last season of Star Trek: The Next Generation. A month after submitting my unsolicited script, I got called into Paramount Studios to pitch more ideas. Not too bad for my first script! That’s when I sort of started taking my writing more seriously and committed.

I like to write in cafés mostly. I plug in ear buds and listen to music—usually instrumental—fitting the tone of my work. For The French Girl’s War, I listened to a lot of 1930’s & 40’s era music, movie soundtracks, and French jazz. If I’m in research mode, I’ll usually get on the Internet and search out my topics, take a lot of notes or bookmark pages I need to come back to. If I’m in full-blown writing mode, I’ll usually start off editing the pages I wrote when I last sat with my work and then continue forward writing from there.

Some of the names are from French friends or acquaintances. I actually named Sophie first and a few months later, my family hosted a young girl from France on exchange through our daughter’s school who also happened to be named Sophie. It was a good omen! I chose Sophie’s last name, “Claveaux” from a list of French surnames. It means “archway” or “gateway” which seemed appropriate since it’s through Sophie that we’re brought into the world of the novel.

Wow! Where can I start? I’ve learned more than I can reasonably list here. Starting with writing, I’ve learned that you can’t do it alone—at least I can’t. I’m part of some remarkable writing critique groups with other published and unpublished writers who offer great, honest, helpful feedback as well as moral and personal support. I’ve learned that you have to have a relentless commitment to your craft. There are so many distractions and demands of our time, each offering an excuse not to write. The rule is simple—you have to want it and work for it.

I don’t know what I would do differently. But having gotten through the first book from concept to published book in 4 years, I hope the next one will go more quickly!

I love all kinds of books. I like Michael Chabon, Kurt Vonnegut, David Sedaris, Carl Hiaasen, J.K. Rowling, Nelson DeMille, Sue Monk Kidd, Doris Lessing, and of course classics by Mark Twain, Fyodor Dostoyevsky, Gustave Flaubert, Jules Verne… I could go on! I think they all offer a distinct voice, a compelling story, and a world in which I can truly immerse myself. They give readers exactly what they want.

My next book is also set during World War II, but later—and this time in the U.S. It’s called, Jingle Boys and will follow three young jingle writers through a secret adventure helping the war effort.

I’d say every writer should write a book they’d want to read and be sure it presses all the buttons they want pressed when they sit on the other side of the book. I’d also strongly suggest joining a writing group, not just filled with friends that wouldn’t want to hurt your feelings, but with people that have opinions worthy of hearing—people you trust. Last, I’d suggest writers have a good, clear understanding of the story they want to tell. I know a lot of writers who toil away with writing, eager to put their story, character, and dialogue down but soon find themselves writing into oblivion. Just like driving, it helps to know where you’re going before you get on the road.

I’ve been quite lucky to learn that my story has had appeal to both men and women, though I really figured it would appeal most to women because of my female protagonist. Just goes to show! I’d say the perfect reader of my book would be someone who likes to see their protagonists make some mistakes, work for an ideal, grapple with danger, face personal challenges, and take risks. I think my work also tends to offer some good visceral detail, so if you want to live a little in the time and place of a story, smell the foods, hear the sounds, see the world around you, then this book would be perfect for you.

Readers can find my book in paperback or Kindle at Amazon: www.amazon.com/dp/1493570889

They can read about me at my website: www.herbthewriter.com

They can check out my blog through my site or directly at: http://williams-dalgart.blogspot.com/