You are here: Home / Self Publishing / Getting Your Book Published: Don’t Try it Alone 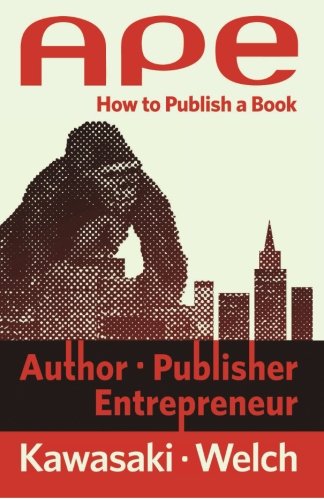 You don’t know him? You will. He is a rising star in the publishing world—a guy who has been silently at work behind the scenes, helping companies like Pearson Education get their bevy of books and information out to the masses.

If you happen to be an iOS developer, chances are really good you already know about Shawn. His books on developing iOS applications and the iOS 5 core framework are basic texts of the trade, and have earned him frequent invitations to speak at conferences, both in the USA and abroad.

There’s a new book out, though, one with Shawn Welch listed as the co-author. And this book isn’t of interest only to an eclectic group of Apple-savvy engineers; it’s a book for anyone interested in self-publishing. The book is number one in its category on Amazon, for both the print and Kindle editions, and it appears to be headed nowhere but up.

APE:How to Publish a Book, co-written by Guy Kawasaki and Shawn Welch, is a prime example of how authors can effectively take the reins back from the big boys and shepherd their own books through the three skills necessary for self-publishing success—writing, publishing, and marketing (APE is an acronym for Author, Publisher, Entrepreneur).

He’s that kind of guy

I recently spoke with Shawn about his rise to stardom. Would you like to know his secret sauce to success?

If someone printed a collection of tee shirts and ball caps with Shawn’s logo on them, I’m pretty sure the slogan would read, I Try.

Blessed with a PhD mom, who is a professor at Kansas State University, and a blue-collar dad who Shawn says displays the strongest work ethic he’s ever seen, Shawn picked up both ends of the stick. He’s smart. And he works his butt off.

That’s how he met Guy Kawasaki.

How to become your own boss

After gaining a bachelor’s degree in computer engineering, Shawn applied to the Ivy League for a spot in graduate school. They turned him down. With trademark determination, though—never doubting he was someday going to build applications people would love—Shawn packed up and headed to Boston.

No job. No prospects. Just guts and faith. That “I Try” tee shirt would have fit really well back then.

Of course, one thing led to another, and Shawn picked up a corporate job. Then another thing led to another and he built an iOS application for Photoshop World … then PeachPitt Press needed someone with iOS savvy to write a book for them … and Shawn Welch found himself working 9-5 for Pearson—changing hats, grabbing a bite—then building apps for clients from 6-10 … and finishing off the day by working on a book from 10-2. Then rinse, wash, repeat and do the same thing all over again the next day.

He tried so hard, in fact, the demands on his time and skills became too much. After considerable deliberation, he quit his day job and moved back to Kansas. 28 years old and self-employed.

All you time-clock punchers out there, take note. At the end of this story, I’m going to let you in on a secret Shawn told me. It’s a sure way to fame and fortune.

How to land a gig working with Guy Kawasaki

Shawn had been following Guy Kawasaki in social media since Twitter launched. One evening, he happened to notice a Google+ post from Guy—one asking if anyone knew how to get Word bullet points to translate over to Kindle. Shawn pitched in, quickly helped Guy out, then fielded similar requests over the next several days.

Guy was working on a new book, What the Plus!: Google+ for the Rest of Us, and it wasn’t long before he asked Shawn to step in and produce the project for him.

And so he did, taking a big load off Kawasaki’s shoulders.

Later, in San Francisco for a conference, Shawn met up with Guy at a coffee shop. That’s where the idea for APE: How to Publish a Book took form. Guy and Shawn wrote the book in six weeks, edited it for twelve weeks, and then Shawn published it in three days (around-the-clock days, pretty well, but nevertheless, three days).

And that’s when the phone started ringing.

Before the fortuitous partnership with Guy Kawasaki, and all the hoopla surrounding launching a book with a celebrity of Kawasaki’s status, Shawn was doing his fair share of speaking. He was finding and pitching most of those spots himself, though, and lucky to break even on the costs.

But that tide quickly turned. Shawn soon received an offer to begin teaching week-long classes, in various cities around the country, for a nationally-known media company. He is getting calls from event organizers—some big-time event organizers—on a weekly basis, and the Navy asked him to join a Distinguished Visitor Embark Tour on a destroyer.

Shawn’s own ship might not have come in yet … but it has definitely launched.

You hadn’t heard of Shawn Welch? Well, you have now.

But what about that secret?

Shawn tries. You know that. He got the job with Kawasaki because he was ready for Guy Kawasaki. Shawn worked hard for years to develop the skillset that would allow him to step in and produce an e-book for a heavy hitter like Guy.

It takes more than trying, though. Trying, by itself, isn’t enough.

There is one thing missing.

Ask Shawn Welch to name the primary key to success, and he’s quick to respond.

It all hinges on the people you meet and the relationships forged. Reach out to people, be kind, be helpful, and be genuine. Jump in there when you see opportunity for your skills to be of value.

After all, nobody does it by themselves … not even Guy Kawasaki.

Writer. Dreamer. Believer. Don Sturgill is freelance writer and a friend of entrepreneurs. Find out more about his work and philosophy by visiting the Roadturn website.

Dan Janal - Write Your Book in a Flash

Essential Tools for Better Self Publishing

The Pros and Cons of 3 Difficult Self-Publish...