You are here: Home / Author Interviews / Delin Colón – Rasputin and The Jews 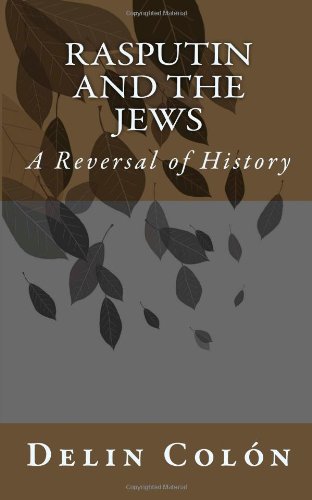 Rasputin and The Jews: A Reversal of History is historical non-fiction. Based on more than a decade of research, the book details specific incidents of Rasputin’s humanitarian efforts on behalf of Czarist Russia’s oppressed Jews, and the consequent smear campaign by the anti-Semitic aristocracy in their attempt to discredit him. Ultimately, the book points out that many innocent people were senselessly slaughtered during the reign of the last czar, or “Nicholas the Bloody,” as he was sometimes called, while Rasputin never harmed nor killed a single soul. The larger message illustrates that the myth of Rasputin’s demonic image is a product of history being written by the powerful (and literate), as opposed to the common man.

I’m originally from New Jersey, although I’ve lived in Baltimore, D.C., Montreal, Florida, San Francisco, Los Angeles, San Diego, Eureka, and am now based on the coast of Washington state. My undergraduate work was in French, while my graduate work was in Clinical Psychology. I hopscotched around to six different universities during my life as a student. I’ve worked in psychiatric hospitals and have been a technical writer, researcher, editor, contributor to literary journals, and owner of a construction company. Although it’s not something I generally add to resumes, I also worked as a Playboy bunny when I attended college. However, that’s not something one would guess from my currently increasing menopausal girth.I began writing at the age of eight, when I was hospitalized for an appendectomy and wanted to chronicle that experience. I never stopped after that.

My father had always told me that my great-great uncle, Aron Simanovitch, had been Rasputin’s secretary. When I was in my 40’s, in an attempt to research Simanovitch’s life, I came across his out-of-print memoirs which had been published in French. (I knew I studied it for a reason.)I was amazed to find out that Rasputin had advocated equal rights for Jews who, under czarist laws, were denied most civil rights – education, many occupations, choice of residence, and often the right to even live. Simanovitch detailed many incidents of Rasputin’s aid to Jews. I began to research my ancestor’s claims, over a period of more than a decade, and found that many, many authors (those who were there, as well as biographers who weren’t) mentioned Rasputin’s efforts for the Jews, whether with admiration or derision. From his daughter, Marya Rasputin’s account to his murderer, Yussupov, this was at least mentioned.

I like a title that tells the reader exactly what the book is about.”Rasputin and The Jews” was the original Russian title of my great-great uncle’s memoirs, and I added “A Reversal of History” to let readers know that I’m offering a point of view diametrically opposed to the myth that’s become so popular.

Initially, I was only going to translate my ancestor’s memoirs about Rasputin.Having done that, I found an editor at U.C. Berkeley Press who was interested and requested the entire manuscript.After having read it, the editor called me and asked what I wanted to accomplish with the book, and I told him that my primary aim was to make readers aware of Rasputin’s unjust treatment by the nobility due to his advocacy for the Jews – that he’d unwittingly been a victim of anti-Semitism. Unfortunately, Simanovitch had also included, in his memoir, a lot of wild gossip about the royal court.The editor pointed out that this diminished my point and my great-great uncle’s credibility.

Thanks to the comments by this very generous editor, I realized I needed to re-think the book and give it a different format. Thus began my years of research, reading everything I could lay my hands on. The new, improved version of my book was more scholarly, documenting the evidence of Rasputin’s aid to Jews, using a multitude of sources.Since I love research anyway, this was right up my alley and was the best way to make my point.Ultimately, that editor retired and, since I didn’t want to spend a lot of time waiting for publishers to respond, I self-published (POD) on Createspace.I think I’d have gone the traditional route, had I written fiction, but since my subject and market were so specific, I felt I could promote and market the book myself. It’s very time consuming, but worth every minute.

I grew up in an artists’ colony, about an hour outside of New York City. A number of residents were writers. The Folsoms, a couple who were both authors, wrote children’s books, among other things, and held an open house every Christmas, allowing all the children to choose one of their books.I loved the fact that I knew the authors and the gift of their creations was special to me.When I was eight years old, hospitalized for abdominal surgery, I felt compelled to chronicle my experience and, from there, began to write poems and short stories.I was hooked.

Since I write non-fiction, the greatest portion of my time is spent on research. So, my only ritual is spreading out my tools on the dining room table. I have to have a certain pen I like, a legal pad, a bunch of little post-its to mark pages in my source books, index cards and, of course, my stack of books that I use for research. I outline on the legal pad and jot bits of information, or quotes, on the index cards, which I can then organize into groups, according to my chapters.I always start out with pen and paper.I’m a dinosaur that way. I feel closer to the work without a machine coming between me and it. Once I’ve organized my bits of information and written narrative segues between them, I transfer everything to the computer.

The writing itself was really no different from any other research pieces I’ve written. At least that part is a finite task. The marketing and promoting, as many authors will say, is a full-time, ongoing job. I was not a social media person before I began marketing my book. I didn’t have a website or blog and never went to any forums or online groups, being something of a recluse in the real world (as opposed to the virtual world). I started out just querying reviewers and have been fortunate enough to gain glowing reviews of my work. But it’s not enough. With the encouragement of a few of my editorial reviewers, I started participating in those online groups and have not only found it very valuable, but was pleasantly surprised by how supportive the writers’ communities are. I’m grateful for the generosity of other authors, in sharing their resources, and have even cultivated a couple of close relationships with other writers.

What types of books do you like to read? Who are your favorite authors?

I have fairly eclectic tastes. I love good fiction in the science fiction, mystery, historical fiction, humor and spiritual genres. Since I read a lot of historical non-fiction for my research, fiction is a nice change of pace for me. My all time favorite non-fiction writer is Tom Wolfe. He’s expert at placing the reader in the midst of the sub-culture he’s depicting, so that the reader becomes an eye-witness. His humor is infectious and his descriptions impeccable. Among fiction writers, Tom Robbins is my favorite. It’s not easy for a man to write from the point of view of a strong female character, but he does it amazingly well, and his dry humor is a plus. Wally Lamb is also talented in that respect. Anne Tyler’s stories of dysfunctional families are brilliant in that there’s always one family member that other characters view as crazy while, to the reader, he or she is the sanest one. John Irving’s books stand out, for me, because the characters are so incredibly idiosyncratic and unforgettable. I also have to add Larry McMurtry who has the facility of time-traveling the reader to the Old West and making you feel the trail dust on your clothes.

I am in the process of researching my next book which will be about true stories of Jews who were confined to the ghetto called The Pale of Settlement, between the Black Sea and the Baltic Sea, during the era of Czarist Russia. While one can read memoirs and autobiographies, or journalist accounts, of the experience of an individual, I want to present the stories of many of these people, to show a collective experience. One person’s experience can have great impact, but there’s greater impact knowing that it was a common experience shared by many.

Writing is a solitary and idiosyncratic process. Each has his or her own method of going about it. There are, however, two things I think are important. First, don’t worry about the business of writing until you’ve finished the process of writing. Concerns about publishing, marketing, promoting, readership, etc., will only distract from the process and you won’t be completely committed to or immersed in it. Just write and to hell with everything else. There’s plenty of time to attend to the business of writing once your final draft has been edited. This brings me to my second point. Edit, edit, then edit again and, if you don’t have a lot of editing or writing experience, hire a professional editor. There’s nothing more off-putting and distracting than verb tenses that don’t agree, subject-verb conflicts, pronoun confusion, a profusion of spelling errors, etc.

Besides my mother? The reader of “Rasputin and The Jews” is someone who has a fascination with Rasputin or is interested in Jewish history, Russian history, anti-Semitism, social injustice, or Czarist Russia. Or, the reader could just be someone who loves reading about unknown pieces of history that, perhaps, contradict a perpetrated myth.

“Rasputin and The Jews: A Reversal of History” is on sale at Amazon in paperback and on Kindle. It’s also sold at Barnes & Noble and on Nook.

My website devoted to the book is at: http://therealrasputin.wordpress.com/ and I have a Facebook page on the book at http://www.facebook.com/RasputinandTheJews