You are here: Home / Author Interviews / David Kalish – The Opposite of Everything 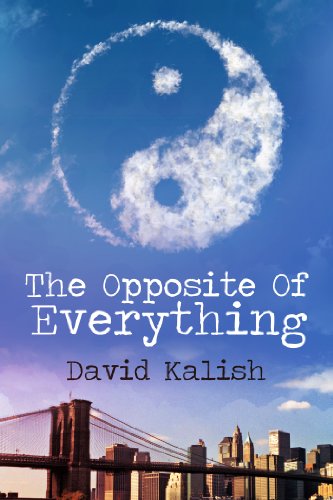 My novel, The Opposite of Everything, which just came out. It’s a comic fictional twist on my personal struggles with cancer and divorce, to treatment and renewal. A zany romance about the things that break our hearts — cancer, crazy families, busted dreams — and the things that sustain us: love and second chances

Took me thirteen years to write.

I’m a long-time journalist, blogger, playwright, and last but not least, a novelist. While I’ve always written, for as far back as I can remember, it wasn’t until I left The Associated Press in 2002 due to medical reasons that I refocused on my fiction writing. I wrote stories and scenes related to my struggles with cancer and divorce, and eventually put them together into a book, The Opposite of Everything, which is why I’m on this tour. After twelve years at AP, fiction was liberating for me. I felt free to play with the facts. Writing about my life this way was also therapeutic. I was able to see events in my life as entertainment — for both myself and readers.

My life was pretty dramatic, and seemed to lend itself to a book. In just four months in 1994, I was diagnosed with incurable thyroid cancer at the same time my first marriage fell apart. I later got remarried to a doctor, and underwent chemotherapy. I turned to writing as a way to let off steam and tell stories people would want to read. The book started as memoir. But after numerous rewrites, I decided the first-person approach wasn’t working. The writing felt stiff. I didn’t know how to express how I felt about my pain. My characters were stick figures.

I decided to create some narrative distance. I tried humor. I made my characters do things their real-life counterparts wouldn’t consider. I told the story in third-person. I replaced real names with offbeat ones. I stretched truths for dramatic effect.

My book is still a story about one man’s struggle, his search for renewal. But I’ve handed it over to actors who are free to do all sorts of crazy things. It’s liberating. I can focus on the story’s narrative arc. I can go to town on my life.

I’m not a big TV watcher, but in the 1990s I was hooked on Seinfeld, the classic sitcom featuring Jerry, George, Elaine and Kramer. As I cracked up, I hardly suspected the show about nothing would help me frame the theme for my novel, The Opposite of Everything, nearly two decades later.

One episode in particular, “The Opposite,” stayed with me long after it aired in 1994.

In it, George Costanza is so fed up with life he resolves to do the complete opposite of what came normally. He orders the opposite of his normal lunch, and introduces himself to a beautiful woman who happens to order the same lunch, saying, “My name is George. I’m unemployed and I live with my parents.” To his surprise, she is impressed and agrees to date him.

The “opposite” concept appealed to me as a novelist on several levels. Looking back on the 1990s, I sometimes felt as hapless as George. I was a busy New York City journalist struggling through stress at work, health problems, and a failed marriage. So when I sat down to write my book, long after Seinfeld went into repeats, I drew on the opposite theme for inspiration. My struggle to write the book echoed the life it depicted. At times, I wanted to run away from both. Instead I fictionalized the trauma, viewing my life through a contrarian lens. The further I distanced myself it, the less I felt like a victim.

In my novel the protagonist, Daniel Plotnick, is a hapless Brooklyn journalist, like me. When he learns he has cancer, his fortunes fall faster than you can say Ten Plagues of Egypt. His wife can’t cope, his marriage ends in a showdown with police, and his father accidentally pushes him off the George Washington Bridge. Plotnick miraculously survives his terrifying plunge, and comes up with a zany plan to turn his life around: by doing the opposite of everything he did before.

I sent various versions of my novel to close to a hundred agents and small publishers over the last five years. With each rejection, I revised the book a little more, reshaping it with the help of fellow writers who I regularly meet with to exchange stories. Over time, the rejections became a tad more positive. Some agents wrote a few sentences saying how much they liked the book but pointed out what wasn’t working for them.

I kept at it. One thing that helped me was my MFA in creative writing that I earned at Bennington College, which taught me a thing or two about what makes a story work. About a year ago, I received an email from a small publisher I’d sent the first thirty pages of my novel to. The acquisitions editor said she loved what she saw and asked to the see the rest of the novel. Two months later, I had a contract.

I wrote my first poem in kindergarten, and never looked back. Throughout the years I’ve written poetry, short stories, newspaper articles, magazine features, a screenplay, and several theater scripts. Though I worked as a journalist for nearly two decades, fiction writing always was my first love.

I write whenever I can. I used to reserve morning for writing, but now that I’m promoting my book nearly all my time is spent writing blog posts, updating my social media networks, contacting book stores, hanging posters, emailing old friends, and on and one – all the countless little things needed for a book tour and social connections to try to help spur sales.

One of my roommates in college had the last name Plotnick, and he struck me as a hapless Jewish character. It was perfect for my protagonist, who’s a hapless Brooklyn journalist.

After signing my publishing contract, I was forced to shed my naïve notions about the journey to the bookshelf. Successful authors, I once believed, focused on what they did best. They rearranged words on the page. And once their first novel was accepted for publication, they’d pop open the champagne, do a couple of book signings, and work full-bore on their second novel.

That was in my younger and more idealistic days. Since my novel was acquired, I’ve barely touched my second. Instead I’ve plunged into social media, a requirement for first-time authors like me. My online presence used to consist of a barebones Facebook page. My incoming Facebook invites went straight into the spam folder, and one of those invites was from my wife. So I gritted my teeth and googled “book promotion plan,” cobbling one together. I reached out for help from people who knew a lot more than me. Today, I spend oceans of time blogging for the Times Union and harnessing Facebook and Twitter. I participate in Goodreads. I update my author Web site. I solicit reviews, sending emails to bloggers, Amazon reviewers, and traditional media reviewers.

I’ll let you know when I’m finished doing it, perhaps by the end of this year.

Be persistent, network with knowledgeable people and ask tons of questions, don’t be afraid to make mistakes, and keep writing. Always try to improve your writing and your social media skills. Most of all, don’t give up. It’s a tough business, so it’s supposed to be tough. If you’re passionate enough about writing, you’ll persevere long enough to succeed.

Someone who appreciates a good joke, enjoys dark comedy, and doesn’t mind characters who go over the top. Since my novel is about a cancer survivor, I’d add a star if you fit into that category.