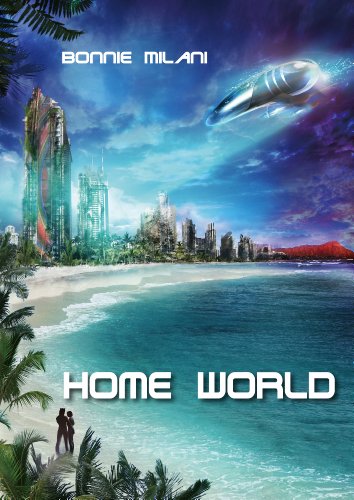 My novel is Home World. It’s a sci fi love story with an interstellar political thriller woven through it. It’s about the price of power, and the price of love. I started out thinking I had a straightforward little Cinderella tale – Keiko Yakamoto, girl from the wrong side of the genetic pool captivates Jezekiah Van Buren, free-spirited-but-duty-bound-future Protector of Earth. Worked fine – until Strongarm walked into the story. That man took one look at Keiko and those furry wolfish ears of his just snapped to attention. After that – all my plans for the story were off. I wound up with two immensely powerful men duking it out for Keiko’s love in a no holds barred battle with the fate of Earth herself hanging in the balance.

Those two just might have worked things out, if villainous old Grandfather Ho, head of the criminal Ho Tong, didn’t have his own plans for Keiko. Or if Jezekiah’s ruling cousins on the other Van Buren worlds didn’t regard his love for Keiko – and his friendship with Strongarm – as High Treason in itself. Or if Jezekiah’s tech-geek little sister Letticia hadn’t decided she wanted Strongarm for herself. By the time they all weighed in, I had a ménage a trios enveloped in a political tempest that threatened humanity’s very existence.

Background, huh? Guess I’ve got kind of an all-American mutt background. I grew up in NJ’s Soprano-land – the kind of place where if something happened you called your capo, not the cops. Only there wasn’t a whole lot of future for a career-minded girl. I was so lucky mom worked for the FAA! So instead of waiting tables my summer jobs were on the FAA base. I got to play go-fer for a group of aerospace engineers running tests on a set of massive engines. The project was supposed to be hush-hush. Trouble was, those were massive engines, and southern NJ is flatter than the proverbial pancake. Every time we fired those things up the ground shook from Atlantic City to Cherry Hill. Cows stopped giving milk. Chickens stopped laying eggs. Seismologists freaked out. I found out only later that the engines we were testing were the launch engines for the first space shuttle.

If I’d had any talent for math at all, I’d have tried to become an aerospace engineer, no doubts about it. Trouble is, my math abilities end at basic arithmetic. I was so determined to dodge math classes in college I wound up with four degrees in literature and language – and ONE remedial math class. On the other hand, all those language studies got me the chance to work in Germany, which is where I first started to see how different cultures careen off each other. I also wrote for my college TV station. My senior year I designed and wrote an environmental fairy tale for the NJ grammar school curriculum. By the time I finished my MA at Stanford I was freelancing articles to local magazines and newspapers along the East Coast. Even wrote a cover story for Science Digest!

A dream. I had this recurring dream of a young woman in a highly decorated military dress uniform chained to a dungeon wall. Not being at all into S & M or bondage – Fifty Shades is NOT on my read list! – the dream both puzzled and fascinated me. What REALLY intrigued me was that the woman in the dream wasn’t terrified. She was seriously ticked off. And she wasn’t even Irish! Obviously, I couldn’t let a sister spirit just hang there so I kept working on just who that young woman was and how she got stuck on that wall. What I discovered was a love story of rival princes enmeshed interstellar political intrigue. ‘Home World’ is the story that grew out of it. Of course, it took me years after that to figure out how to tell the story! As it is, Home World is the first of 3 novels that I’ll need to tell the whole story. May God grant me life enough!

I can’t remember a time I didn’t tell stories. I once read a quote to my mom from Mark Twain’s mother in which she said something along the lines of ‘you have to discount 90% of anything Sam (Clemens, Twain’s real name) says. But that last 10% is pure gold.’ My mom thought the woman was talking about me. I came up with stories for everything. Other kids just played tag. I scripted out spy stories to give the game a dramatic feel. Taught me early on that everybody’s an actor, and every actor wants to be the star. Also to never give a lousy role to a kid who’s both bigger and faster than you.

How do you come up with the names for your characters?
Actually…they kinda sorta name themselves. I find that as I get to know a character, I throw different names at them. I know I’ve hit on the right name when the character sits up and responds. Sometimes, though, the character already knows who he is. Jezekiah simply was. Ditto the other Van Burens. They just seemed to materialize with their names already in place. By contrast Grandfather Ho, the old villain, told me who he was and made no bones about it. Kip Marsden was cute: I knew he needed a good, manly, cop-type name. I kept trying to pull names out of Raymond Chandler, like Mike and Marlow and such. Zip. Man just ignored ‘em all. Then I picked up the novel Kim by one of my all time fave authors Rudyard Kipling and got a blip of interest. The name Kim felt too weak, but I got a distinct ‘no you don’t!’ when I tried Rudyard Kipling. That told me he was a man with a name that embarrassed him. And so Rudyard Kipling ‘Kip’ Marsden was born.

Oddly, the character name that gave me the most trouble was Keiko. Could NOT come up with a name she liked. I worked through Hawaiian name dictionaries and got nothing. Then I tried Japanese names. I knew her name had to be strong, but nothing got a response. I even tried Seiko. Totally forgot it was a watch brand. Then Grandfather Ho started punning on keiki the Hawaiian word for child – and Keiko Yakamoto turned around and said ‘heia’.

I find I always come back to the classics. I think I’ve read Pride & Prejudice at least 19 times. Jane Austen ROCKS. Ditto Charlotte Bronte with Jane Eyre. There’s such a powerful call for recognition of women’s humanity throughout the work of these women. Then Rudyard Kipling, who never seems to get credit for standing up for the humanity of ‘the natives’. The people and places in Kim are just as real today as they were in 1901, and the Great Game plays on. Going back farther I’ve got much of the Fitzgerald translation of the Rubiyat by heart and still cackle like a fat old hen at Juvenal’s Satires. There’s just something about listening to a first century Roman complain about crooked contractors…

I think the reason I enjoy the classics so much is that as a reader every re-read reveals something new, something I was too young or inexperienced to recognize previously. Reading as a writer, though, the lessons are even more important. Classic stories illustrate beautifully just how 3-Act structure works. I tested it on Grapes of Wrath once, using the 1/3-1/3-1/3 rule. Damned if Steinbeck didn’t bring it in almost to the page. Long hand. Moment of major respect for this woman. So I tested Pride’n Prejudice and Kim, too. Same result: those authors hit their marks on the nose.

DO IT. Just DO it. You’ll never find time to write. You have to make it. If you truly want to write anything and finish it, you must set yourself a writing schedule and stick to it. Otherwise, life will always get in the way.

The other bit of advice I’d offer is learn to separate yourself from the words you’ve put on the page. Our words are like children. While they’re in us, they’re babies that need to be sheltered and nurtured while they grow into stories. Once those stories hit the page, though, they turn into teenagers. At that point, they have to learn to stand on their own two feet if they’re ever going to grow up into real, true, WORKING stories. Over the years I’ve been a writing teacher as well as writing coach, and freelance sci fi editor. I’ve run my own writer’s group on a paying basis. The greatest mistake I’ve seen aspiring writers make is to regard any critique as a personal insult. That’s just self-defeating. In story-terms, it’s the equivalent of refusing to ever discipline your kids. Stories, like kids, do not benefit from undeserved praise. They can’t grow into themselves unless they’re praised when they work and corrected when they don’t.

Women who like soft sci fi, or fantasy, or a good THINKING love story. I’d love to find a way to reach the women who enjoy reading Michael Crichton because my stories are PEOPLE driven rather than tech-oriented. Home World is a thinking woman’s love story. I wrote it with women in mind because so much of what’s out there in sci fi these days is really ‘guy stuff’. The character-driven stories seem to be in Fantasy. I want to bring the Fantasy readers into my sci fi realm. Mind, I’m totally happy to welcome all the men readers I can get!

Where can readers learn more about you and your book?
There’s the Facebook page, of course.

Or you can see illustrations and character sketches on the novel’s home page, www.homeworldthenovel.com

And, of course, the ultimate site of all: Amazon.