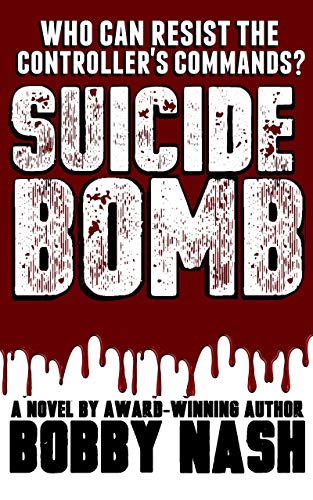 My most recent novel release is Suicide Bomb, a thriller.

This novel has been in the works a long time. I started on it after my first novel, EVIL WAYS was released in 2005. Then, I sat it aside for some other deadlines and assignments. Eventually, the book kept getting pushed aside. In 2017, I decided to revisit the novel, at that time titled Blood Shot. I did an edit/rewrite pass and released a chapter at a time to my Patreon subscribers (www.patreon.com/bobbynash). This not only put the book back on a real deadline, but also allowed me the opportunity to get instant feedback from patrons. I also took the opportunity to kill off a couple of patrons in the book… with their permission, of course. Ha! Ha!

From Amazon: Imagine if you had the power to turn anyone into your personal assassin. Would you use it? For the mysterious man known only as The Controller, the answer is yes! He has perfected the ability to turn ordinary men, women, and even children into the ultimate killers, Suicide Bombs who self-destruct after carrying out their deadly tasks. Washington DC Metro homicide detectives Catherine (Jacks) Jackson and Melvin Carter team up with disgraced Secret Service Agent Samantha Patterson to solve a rash of mysterious murder/suicides that put them on The Controller’s trail and directly in the killer’s crosshairs. Can Jacks and Sam stop The Controller before he goes after his ultimate target, the man who derailed the original project years ago, William Montgomery, then a Senator, and currently President of the United States of America? The final Suicide Bomb is primed and ready. Who will it be? Suicide Bomb is a thriller written by award-winning author Bobby Nash. Published by BEN Books. You can find it in paperback and ebook at Amazon.com and you can read it FREE if you are a Kindle Unlimited subscriber or a Patron of mine. Hardcover and audio editions will be available in 2020.

I am from Atlanta, Georgia and I currently like roughly 50 miles outside of Atlanta. I haven’t traveled very far, have I? I started out wanting to be a comic book artist and writing stories began there. Eventually, based off the advice of a friend, I decided to stop splitting my focus between writing and art and focused on writing. After that, my writing improved and a few years later, I sold my first comic book script to a publisher. Then came that fateful day when I decided to write a novel. My first professional published work came in 1992 when I did comic strips for a kid’s magazine. That series ran 12 years. My first professional comic book premiered in 2000. My first professional novel was released in 2005.

Suicide Bomb came about when I wrote the plot, which was originally a comic book pitch for a company’s character I was pitching. The publisher passed on the pitch, but the idea stuck with me. No plot goes unforgotten so when I created the characters of Catherine Jackson and Samantha Patterson, the protagonists in Suicide Bomb, I realized they were the perfect characters for this plot. A few tweaks to the story and the novel was off and running.

I didn’t really do much in the way of celebrating the launch of SUICIDE BOMB when it was published on December 6, 2019. I probably should have and there is still time for a little celebration. I haven’t had a launch party for one of my books since EVIL WAYS back in 2005 when my parents threw one for me, which was really nice of them.

As I mentioned above, I started writing so I would have something to draw when I wanted to create comic books. I still love writing comic books and I do it as often as possible. I don’t draw as much as I used to, but focusing on writing over the art certainly helped me improve my writing skills. I am mostly self-taught, though I did take a night class at the local college while I was writing EVIL WAYS. I learned a lot there.

I’m somewhere in the middle. I jokingly referred to myself as Captain Plottypants once. I have a loose plot, usually consisting of bullet points with plot points I need to hit. Then, I follow my characters from plot point to plot point to see how they get there, trusting that the characters will take me where I need to go. This method allows the occasional diversions or character beats that might not happen if I did a full outline.

I work every day. There are days where I do admin and writing-related work as opposed to actual writing. It’s necessary work, but doesn’t do much for my word count. I try to write at least 5 or 6 days a week. I am not always successful. Life likes to throw us all curveballs, don’tcha know?

Three. I wrote the original draft. Then I gave it a once over while in progress. Once completed, I gave the book another pass. After that, it heads to the editor.

I use Microsoft Word. I have tried a few other programs, but Word is pretty easy to use so I stick with it.

If I could impart younger me with a piece of advice, it would be to focus on the plan and stick with the plan. I might have had fewer growing pains. Then again, I learned a lot from those growing pains so maybe not.

I do read reviews. I make it a point to thank the reviewer for taking the time to leave a review. Nothing beyond that though.  The last thing I would ever do is argue with a review. I also share new reviews to social media as part of my promotional plan. The trick is not taking bad reviews personally. It’s not easy, but you have to try not to stress over them and they will happen, believe me.

If you want to write as a career, then you have to treat it like a job. That means writing when you don’t feel like it, pulling all nighters to meet deadlines, things like that. If it’s a hobby, write when you feel like it. If it’s a career, you make yourself sit down and write.

I have been quite fortunate to get to know many writers over the years. I have made great friends doing conventions, appearances, social media, and the like. I learn a lot from my writer friends. I see how they handle storytelling issues that I might have or watch how they interact with their fans. We also help one another promote. I try to promote one thing a day that is for a friend’s book or project.

Who is the perfect reader for  your book?

Most of my readers are aged 18 – 45 and I tend to have more female readers than male readers.

www.bobbynash.com is where you can learn all about me and my life, my books, upcoming projects, acting gigs, interviews, podcasts, convention appearances, and more. www.ben-books.com is my publishing imprint and you can learn about my indie published books there.